Faiza Amin’s experience volunteering with VSO ICS last autumn gave her a unique insight into the barriers Nepalese girls face accessing education. Here’s how she ended up at the Girls’ Education Forum telling the story of Beena, whose early marriage forced her out of school.

“She will be getting married and will leave school later this month,” the headteacher said.

I looked across at the group of class 10 students (aged 15-16) at the secondary school in our ICS community placement. The girl who the headteacher was referring to was called Beena.

It was our first week there, and my team were having a discussion with the students about what education meant to them. Things were financially hard at home for Beena, and after losing her mother when she was young, Beena had struggled to come to school because of the amount of housework she had to do to look after her family.

“Education means I can do something with my life”

When I asked her why she still worked hard to attend school despite all the setbacks she faces, Beena replied that education meant she could “do something with her life”. Now, because of those very same challenges, she will be getting married instead.

In our team training in Kathmandu we had spoken about early marriage and the barriers that girls in the community faced in getting an education. But those had been conversations about numbers. I hadn’t expected to see it so starkly like this.

A girl really can be denied the opportunity to fulfil her potential and change her life simply because of circumstance.

That night, after finding out about Beena’s story, I phoned home upset and spoke to my dad. He, along with my family, had been supportive in my journey to Nepal with ICS to challenge myself to work with others and help make a change.

"A girl really can be denied the opportunity to fulfil her potential and change her life simply because of circumstance."
Faiza Amin
Volunteered in Nepal 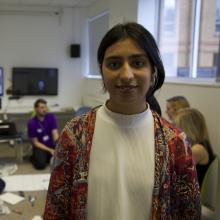 But faced with this challenge, I didn’t know how to respond. In that phone call he reminded me that my team of both UK and Nepali volunteers were not there to help one person, but to make partnerships and help facilitate the empowerment of the community as a whole.

We may not be able to help Beena now, but what about the other young girls in the community or any daughters Beena may end up having? What could be done for them?

Despite going on to deliver a programme for school children in the community that even included a street drama raising awareness about child marriage, I never forgot about Beena, even after returning from Nepal.

So when I saw there was an opportunity to be one of 150 ICS volunteers at the Girls’ Education Forum in London last month to talk to decision makers from NGOs, government and the private sector, agreeing on an action plan to secure access to quality education for girls around the world, I knew it was an important step to take.

I wanted to help create a plan so girls like Beena have the same opportunities that my sisters and I have had. It wasn’t about me, but about raising their voices and telling their story when they don’t have the opportunity to do so.

“Leading their own destinies”

On the day, I told Beena’s story to Baroness Verma, the (then) Under Secretary of State for the Department of International Development, and questioned her on what should be done for girls like Beena around the world who are facing the same barriers to education.

What surprised me was that the Baroness herself married when she was young, and having grown up in a culture where girls were told they’re not as important as boys, she fought hard for girls to have access to education “so they can be people that lead their own destinies”.

Speaking from her personal experience, the Baroness stressed that “you never stop learning,” and that girls like Beena do have choices in life – but it’s about how they make those choices, and making sure they don’t give up.

But whilst the forum was a great space to share powerful stories and have conversations like this, what’s needed now is action.

Young people have a great stake in these important issues, and once empowered and given real access, we can be true agents of change. In doing so, we can make sure that the ‘Beenas’ of this world don’t give up and don’t get left behind.

If you’re passionate about equal access to education, ICS works across the world to improve outcomes for girls like Beena. Apply now for funded placements in 2017.