Edna Adan is the mother of Somaliland. Here’s what Africa’s ‘Iron Lady’ means to me

Edna Adan is a fearless activist. For the last four decades she has campaigned against female genital mutilation in her motherland and across the world. She turns 80 this year.

An activist is an honourable thing

A fearless, unapologetic activist has the power to ignite a change in someone. Edna is one such woman.

Edna works tirelessly to bring hope and healing to our native Somaliland, a nation fractured by war, poverty and sickness.

Every sacrifice is worth giving to a cause you believe in. If you are called an activist for it, well, being an activist is an honourable thing
Edna Adan
Women of the World Festival, Southbank, 2017 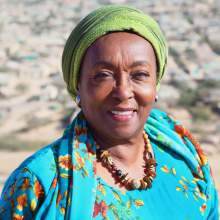 Edna is not just an activist, but a nurse and midwife with decades of experience. A combination of professional knowledge and human compassion, she has a lifetime of tales of her struggle fighting FGM.

A woman of firsts

In the 60s Edna was the only trained midwife in the whole of Somaliland.

She ran a hospital maternity department for 22 months unpaid before the government finally agreed to give her the wage she deserved. “Hold on for as long as it takes, if you believe in it,” she urges. “If I had stopped working, then that door would be closed forever.”

Edna knew from a young age that she wanted to build a hospital in her home country. In 2002 she achieved that goal, building a maternity hospital on land previously used as a rubbish dump.

Somaliland is a country dealing with one of the highest maternal mortality rates in the world. One in seven children don’t reach their fifth birthday, and standards of care vary wildly. Edna tells us her father was a doctor and she often saw how he lacked the equipment to properly treat patients.

'It's happening in the dark': Meet Grace, the ICS volunteer fighting FGM in Manchester

But it wasn’t just a lack of access to proper healthcare that frustrated Edna. She was angry about Somaliland’s culture of ‘cutting’ young girls. FGM in her eyes, is nothing to do with culture or tradition. It’s a crime and the child is the victim.

She speaks from experience. At seven years old, she was cut against her father's wishes. Her grandmother decided, as in most families, that the operation would happen.

Having campaigned against FGM for more than 40 years, she was one of the first to bring up the discussion in Somalia and Somaliland in the late 1970s. She was shunned for discussing such a taboo subject.

‘FGM is no longer an African problem’

In Europe, she says, there is a perception that FGM is an issue that isn’t present. “But FGM is no longer an African problem,” she warns.

And she’s right. In 2015-2016, there were 5,700 recorded cases of FGM in the UK, with an estimated 137,000 women and girls living in the UK having gone through the procedure. Effects include a risk of inflammation and infection and long-term medical complications which last well into old age.

At her hospital in Hargeisa, the capital of Somaliland, she has also established a university. There, staff train women in nursing, midwifery and medicine, as well as helping to educate them on FGM. So far, more than 1,000 health professionals have been trained as a result of her project.

Edna means a great deal to women in Somaliland and the diaspora community. She does not lecture, but instead has an intimate discussion with those that are in the room. She inspires, cultivates and teaches women – whether with her hands or her words.

While I was volunteering in the rural town of Ngqeleni in the Eastern Cape of South Africa on the government-funded ICS programme, Edna’s optimism was an inspiration to me during my conversations with young girls about body autonomy and their right to be free from harm.

As a Somali-British woman and having come from a family of women who were subjected to FGM, I can relate with Edna’s defiance of cultural expectations.

FGM is a taboo subject, but one that will only be abolished if we talk about it and allow girls a platform to discuss their experiences freely.

It’s a tradition that has been passed down from woman to woman. But thanks to the work of activists like Edna, this stops with me and my generation.