A year after she resisted marriage at 14, Shapla is still happy at school

A year ago, Shapla, a 14-year-old Bangladeshi girl who used the lessons she'd learned from VSO ICS volunteers to convince her dad not to marry her off to a 37-year-old man.

One year on, we are delighted to report that not only in Shapla still happy at school, she wants to volunteer to inspire more girls to resist child marriage.

Shapla and her parents live in Durgapur in the northwest of Bangladesh. Despite the country having gradually raised the legal marriage age from 12 to 18 in a series of Acts, three quarters of girls of girls who live in rural communities like Shapla's are married off before the age of 16.

Shapla was 14 when she learned that her father was planning to marry her off to a 37-year-old man. Her father says:

“I earn a little money by driving my van. Sometimes I can’t buy her books and fulfil her needs. I thought it would be better if I marry my daughter off with someone as soon as possible.”

“l want to be a doctor or engineer, but first I want to do something for the girls who are like me so that they can continue their study."
14 year old Shapla 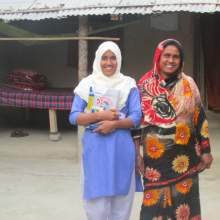 Far from the cities, where 36% of people live on less than $2 per day, the financial appeal of the dowry that is paid to a girl’s family when she is married off is very alluring.

As she learned of her father’s plan, Shapla was reminded of what she had learned in an awareness session run by VSO ICS volunteers some weeks previously, about the legal marriage age and her rights to decide if and when to be married, and to whom:

“When it matched with my own life, I realised that I have learnt a lot from these sessions. The local youth club members then helped me in convincing my parents.”

Volunteers in Bangladesh were really inspired by Shapla's courage, so when the opportunity arose, they were anxious to hear whether she was able to hold out towards finishing her education - or if the pressure to marry had become too great.

More than a year on, Shapla is still in school and enjoying her studies – and her childhood. She has big dreams for her career, but she also wants to become a volunteer. She says:

“l want to be a doctor or engineer, but first I want to do something for the girls who are like me so that they can continue their study."

An asset and a role model

For his part, Shapla's father has changed his perspective:

“My daughter’s learnings made me realise how brutal child marriage is and what health hazards a girl can face because of it. Now I don’t think of my daughter as a burden, I consider her as an asset who will do something for the people of my community.”

The head teacher of Shapla’s school is now using her as a role model to other girls. He said:

“Shapla is the inspiration for other girls. VSO ICS teams organized several 'courtyard sessions' in the community. Some sessions about early marriage were organized in my school ground also. I have seen how motivated and inspired the girls were through these sessions! I think it is not only Shapla who was inspired. You may find many girls in our community who did the same like Shapla (stopped their early marriage)."

Two steps forward, one step back

It's inspiring to hear stories like Shapla's. But there are still thousands of girls whose childhoods end cruelly with forced marriages. Child marriage is an act of force, since a child has limited ability to choose and resist. Girls who are married as children are also far more likely to experience violence and be forced to have unwanted sex with their partners. The resulting underage pregnancies can pose mortal danger to underdeveloped female bodies.

VSO ICS volunteers are still working to change attitudes at the grassroots level.

Find out more about our impact